As Americans, we’re entitled to everything that is outlined in the Constitution. The very first amendment provides us with freedom of speech. Where are we allowed to speak, however? It’s becoming increasingly clear that not everyone has the right to free speech.

Liberals are running the world of tech. This means that social media platforms can censor anything, app stores can limit the downloading of various platforms, and Google can even eliminate a website altogether.

It’s always been that freedom of speech has been limited. You can’t say anything you want. The Supreme Court ruled many years ago that there are categories of speech that are prohibited – obscenity, defamation, true threats, and others are on the list of what you can’t say.

Republicans and even those who are simply moderate find themselves being constantly muted by technology.

Want to join Parler so you don’t have to be censored at all? Yeah, about that – the liberals closed Parler. What was considered the only “safe space” to share opinions about the country is now closed.

You can say whatever you want as long as it is the same as what the liberals believe. If you have your own opinion about something, keep it to yourself. If you share thoughts that are different than that of the liberals, they’ll ban you, delete your posts, and attempt to mute you in any way possible.

People who wanted to log into Parler on Sunday to discuss the latest about impeachment, the riots, the elections, or just to check in with their friends were shocked to find that Amazon suspended Parler.

Wait, how can they do that?

Anyone who has built a robust website knows that Amazon offers a cloud hosting service known as AWS (Amazon Web Services).  Parler was hosting their site on AWS and received a notice that they would be getting cut off.

As Amazon workers, we demand Amazon deny Parler services until it removes posts inciting violence, including at the Presidential inauguration.

We cannot be complicit in more bloodshed and violent attacks on our democracy.

This was after both Apple and Android app stores identified that they would be deleting Parler from their directories. The only way that the social network favored by conservatives could continue to exist is if they promised to start censoring posts.

Parler has risen in popularity because they don’t censor. They’re simply a social media platform that allows people to create posts and establish networks of friends.

Does Parler stand a chance of resurrecting itself? According to the site’s CEO, John Matze, it will take longer than expected. 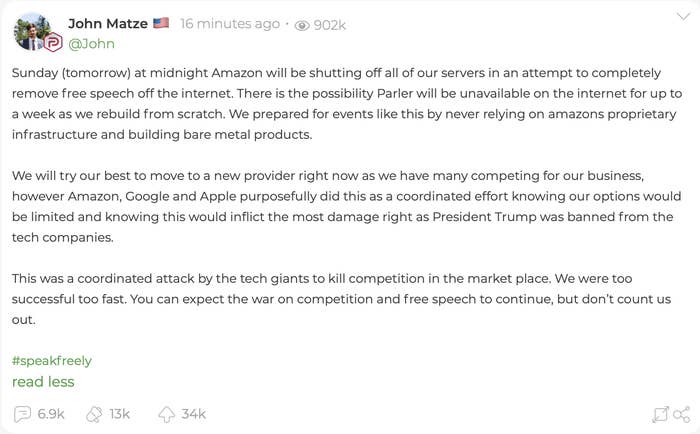 The servers that have enough space to host have shut their doors to hosting Parler. It’s a conspiracy of epic proportions – and it’s truly making people question whether they have free speech anymore.

There are always exceptions to the rule. Should people be given a free space where they can talk about openly executing VP Mike Pence? Absolutely not.

However, what about all of the people who were using Parler to talk about their beliefs without being flagged? What about the people who wanted to have open discussions about conspiracy theories without having their accounts shut down?

Social media has decided that they’re going to be the judge, jury, and executioner of what speech will and will not be allowed. So, unless we want to shout with megaphones outside of our front doors to have our opinions heard, there’s no other way.

The GOP is demanding that social media and their “fact-checkers” be adjusted. However, what the liberal tech giants have done to Parler proves that our Constitutional rights as Americans are now in jeopardy of being taken away forever.

Your free subscription includes prosperous living tips and specials sent by email in accordance with our trusted Privacy Policy.

Gun Confiscation is Already Happening in One Liberal State

Biden Brags About His “Low” 2022 Deficit

Biden’s Ignorance Is On Full Display

Think COVID is Over? Tell That to the Biden Administration